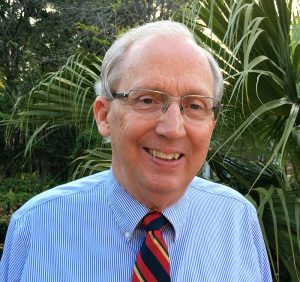 Dr. Sligh has been practicing in his family practice since 1977.  He is a third-generation chiropractor.  His grandparents, Dr. Joseph Sligh and Dr. Emma Sligh started this practice in Lakeland, Florida in 1926.  Their work was carried on by their son, Dr. Walter E. Sligh, who profoundly influenced his son, who saw as he grew up the benefits of chiropractic care and the importance of his father’s faith.

Dr. Stephen Sligh was born in Lakeland and has lived here all of his life. He is married to Annette and they have two daughters, and five grandchildren.  Spending time with his family is Dr. Sligh’s favorite activity.  His hobbies include stamp collecting and fishing and he also enjoys college football and yard work.

Dr. Sligh says the most important thing to him is “to glorify God in all that I do.”  This determines the way he runs his practice, where the most important part of the job is “making the right decision regarding a patient’s care.”

Dr Sligh earned a Bachelor’s of Art degree from Covenant College in Lookout Mountain, Georgia, then volunteered in the United States Army for two years.  He graduated from the National College of Chiropractic, in Lombard, Illinois in 1976.  His professional interests include spinal biomechanics, rehabilitation and exercise.

He has held a number of leadership positions in the Polk County Chiropractic Society and has received recognition from the National Committee for Quality Assurance Back Pain Program.

Dr. Sligh’s community involvement includes church activities, serving on the board of the Lakeland Christian School, as well as treating patients at Lakeland Volunteers in Medicine.